How many homes are on the market?

How many homes are on the market? 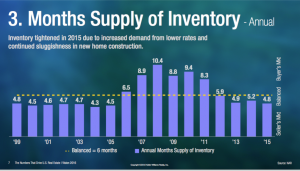 KIRKLAND, Washington (March 7, 2016) - Home prices in King County hit new highs in February as buyers tried to outbid each other for the sparse inventory in much of Western Washington.

With the number of single family homes for sale in King County down nearly 30 percent from a year ago, prices on last month's sales surged 19.8 percent, jumping from $429,900 to $514,975. Ten other counties in the 23-county area served by Northwest Multiple Listing Service also reported double-digit price gains for single family homes that sold last month, according to its latest statistics. Condo prices surged 19.6 percent.

"Buyers who are looking for houses cannot start looking at the top of their affordability range -- they should look 15 or 20 percent below their limit and be prepared to go over list price if they have any hope of success," suggested Frank Wilson, immediate past chair of the Northwest MLS board.

Current levels of inventory translate to 2.4 months of supply, well below the four-to-six months that industry experts use to indicate a balanced market. In the four-county Puget Sound region, supply is hovering near or below two months, with King County having the lowest level at only 1.3 months of supply. Snohomish County reported about 1.5 months, Pierce had slightly more than 2.1 months, and Kitsap County was at about 2.3 months.


Despite the frustration for buyers and brokers, pending sales improved on year-ago figures. Northwest MLS members reported 9,052 pending sales, up 5.3 percent from a year ago when they tallied 8,599 mutually accepted offers.

Scott described current activity as a "Pac-Man" market - "Houses are being gobbled up as soon as they come on the market," he stated.

Seven counties, including King County, reported year-over-year declines in pending sales during February in the wake of inventory shortages. Pending sales in King County fell about 5.6 percent compared to twelve months ago. The selection in the state's most populous county plummeted nearly 32 percent from year-ago levels while asking prices jumped about 22 percent.

"The big story this month is the nearly 20 percent jump in King County prices which has brought the median home price to an all-time high," observed OB Jacobi, president of Windermere Real Estate. "Affordability is on the decline in King County which is part of the reason why sales of single family homes are down," he noted, adding, "So where are those priced-out buyers going? The answer for some is condos. With the rent-versus-buy ratio at about two years, many buyers are seeing the wisdom in investing in a condo as a means to take advantage of low interest rates and get into homeownership."

Pending sales of condos increased about 4.8 percent area-wide, despite shrinking inventory. The number of active listings dropped 36.6 percent from a year ago, resulting in only 1.4 months of supply. In King County, which accounted for six of every 10 condo sales that closed last month, there is only about a month of supply. Condo prices in that county jumped 26 percent from a year ago, rising from $257,000 to $323,975. That compares to a median selling price of $514,975 for single family homes that sold last month in King County.

For others, a longer commute is the ticket to homeownership.

Pending sales in Kitsap County rose 9 percent in February compared to a year ago. Prices increased 7.7 percent year-over-year, but Wilson expects even more escalation. "It would not be unreasonable to think we might see double-digit price increases this year," he commented.

Rapidly rising prices are worrisome to some brokers.

"In some situations sellers, in efforts to glean as much from a sale as possible, and buyers, in efforts to have their offers accepted in competitive presentations, might find themselves the subject of anecdotal stores regarding low appraisals," noted MLS director Bobbie Petrone Chipman, principal managing broker at John L. Scott in Puyallup.

"Buyers line up at houses that are available and find themselves in bidding wars," said Wilson. "This market squeezes all the fun out of buying a home. Prospective purchasers who are coming up short tend to be first-time buyers or those who are using anything other than cash or conventional loans," he added.

Moorhead cautioned sellers about being overly aggressive on pricing. Sellers are pushing price harder than ever, he said, and some are missing market price, resulting in longer market times. "Buyers perceive this as 'there must be something wrong with the home,' especially if the home is still on the market past an offer review date that was set when the home came on the market."

Even though the current market poses challenges, brokers remain optimistic about the market's strength.

Mike Grady, a past chairman of the MLS board, anticipates "a long steady increase in pending sales projecting favorably into 2017." He cited projections suggesting long-term interest rates will remain stable, job growth in the region will remain strong, and new housing starts will continue to lag behind demand as factors in his prediction. These factors "create the simple formula of high demand, low supply equaling increasing prices, creating the consumer confidence we continue to see," stated Grady, the president and COO of Coldwell Banker Bain.

Scott also expects robust activity during 2016. "Six months ago we predicted the major decline in inventory throughout the winter months would create a more intense market starting the first of the year. It's déjà vu all over again," he commented.

Noting this pattern has existed for the the last three years, Scott said the current lack of inventory is taking its toll on homebuyers. "We are facing the most intense market yet."

Starting this month, Scott said "We'll start to see an explosion in the amount of sales activity for the next eight months. That's the good news. The bad news? Market conditions still require buyers to make an instant response because there are so many other hungry buyers out there."

Northwest Multiple Listing Service, owned by its member real estate firms, is the largest full-service MLS in the Northwest. Its membership of nearly 2,100 member offices includes more than 25,000 real estate professionals. The organization, based in Kirkland, Wash., currently serves 23 counties in Washington state. 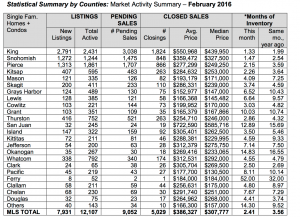 How does this effect you? Call us today so we can explain!

To continue searching, you must agree to the Terms of Use.

For the best experience, please provide your cell phone number and select accept below to opt-in to our Terms & Conditions and Privacy Policy to begin receiving text and voice communications.

or make a new notebook

Verify the value of your home,
maximize your investment and see local market activity.

We just need your phone number to finish creating your account.